Guy and Jules Sebastian are a stylish power couple who need no introduction within the landscape of Australian music and entertainment, as well as philanthropy. They’ve been friends of Freedom Kitchens for several years, and through The Sebastian Foundation, we work together to renovate kitchens in local shelters and refuges, creating brighter spaces for people in times of need.

Having previously designed a kitchen for the Sebastian’s own former holiday home in Gerroa, we’re now proud to unveil all the details of their brand new Freedom Kitchen in Maroubra – which is on a whole other level!

Guy and Jules purchased the five-bedroom Maroubra home at auction five years ago, but later chose to demolish the original house so they could build their dream home from the ground up. They enlisted Joe Snell architects to help them map out the blueprint and make the most of the generous 1341 sqm block which boasts ocean views, plus a pool and tennis court in the back yard.

As one of the most important rooms in the house, the vision for the kitchen space was to create a sleek, open-plan centrepiece, in keeping with the ultra-contemporary style of the entire house. A key feature of their build is the atrium, which floods the kitchen and living area with natural daylight, and the design of the kitchen needed to draw upon the benefits of this to full effect.

Guy’s brief to Freedom Kitchens was to bring this aesthetic vision to life, whilst ensuring their kitchen has the most functional and efficient layout for their family. Guy and Jules also wanted to create a true ‘entertainer kitchen’ with the capability to host lots of family and friends, and include a butler’s pantry to hide away mess.

For their appliances, Guy and Jules had a few extra pieces to fit in than the average family kitchen. They clearly take their food and wine seriously, as a full-size wine fridge and dedicated dry-aged meat fridge was on the list. Other major appliances they had chosen included a large French door fridge by SubZero, plus two ovens and a cooktop range by Gaggenau.

Plenty of storage, especially drawers, was important to Jules, whilst keeping the look of the joinery sleek. Guy and Jules were also set on dark and contemporary cabinetry, to complement the other urban industrial type materials planned for the space, such as concrete floors and walls.

The starting point for Freedom Kitchens was to nail the kitchen layout, ensuring that the design could incorporate everything that Guy and Jules envisioned.

To this end, the Freedom Kitchens designer modified the plan for the space into a more open, L-shaped layout. The generous 3.8m x 1.5m deep butler’s pantry was positioned parallel to the kitchen, and given two access points, to create the ideal sense of flow and connectedness.

The cabinetry was meticulously measured to accommodate their fridge with a completely flush finish, along with the side by side ovens. 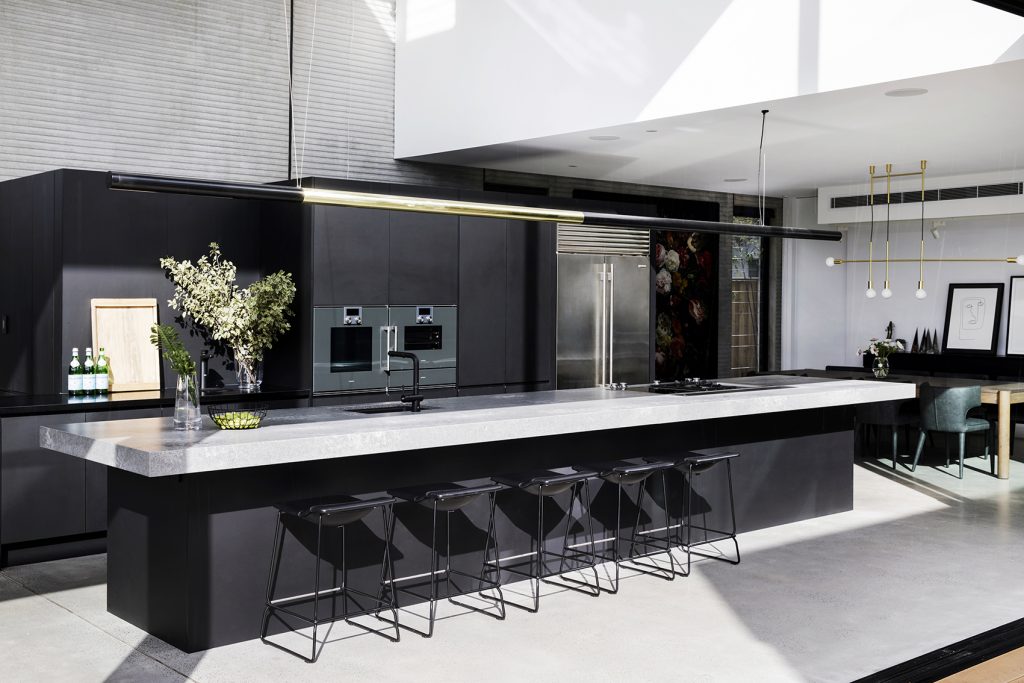 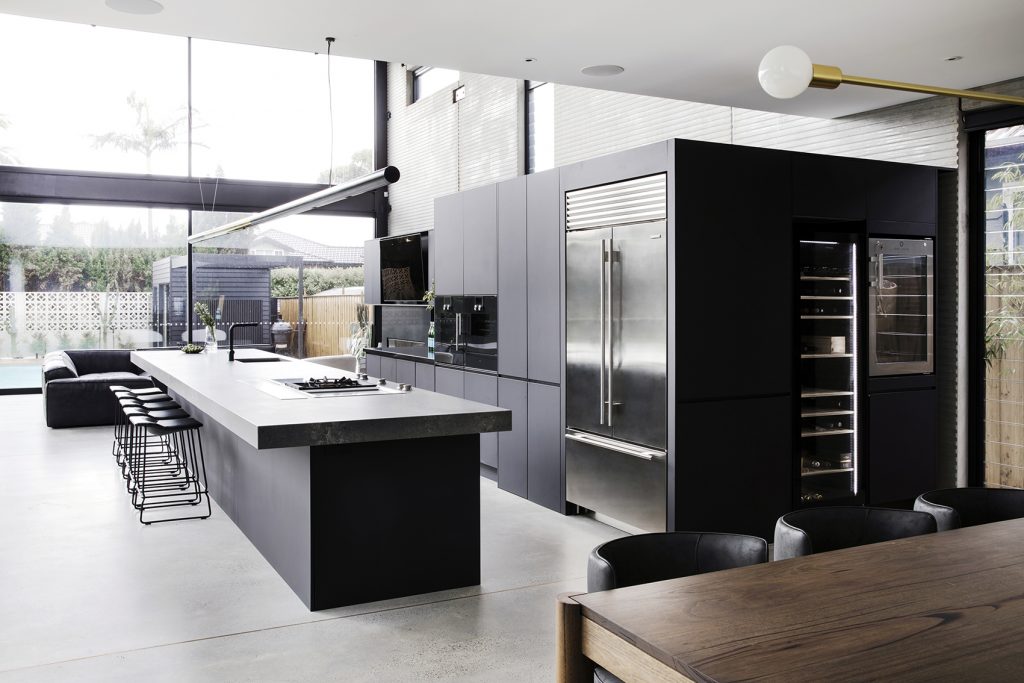 Their wine fridge and dry-aged meat fridges were given prominent positions in view from the dining space, to showcase them as talking points when entertaining. 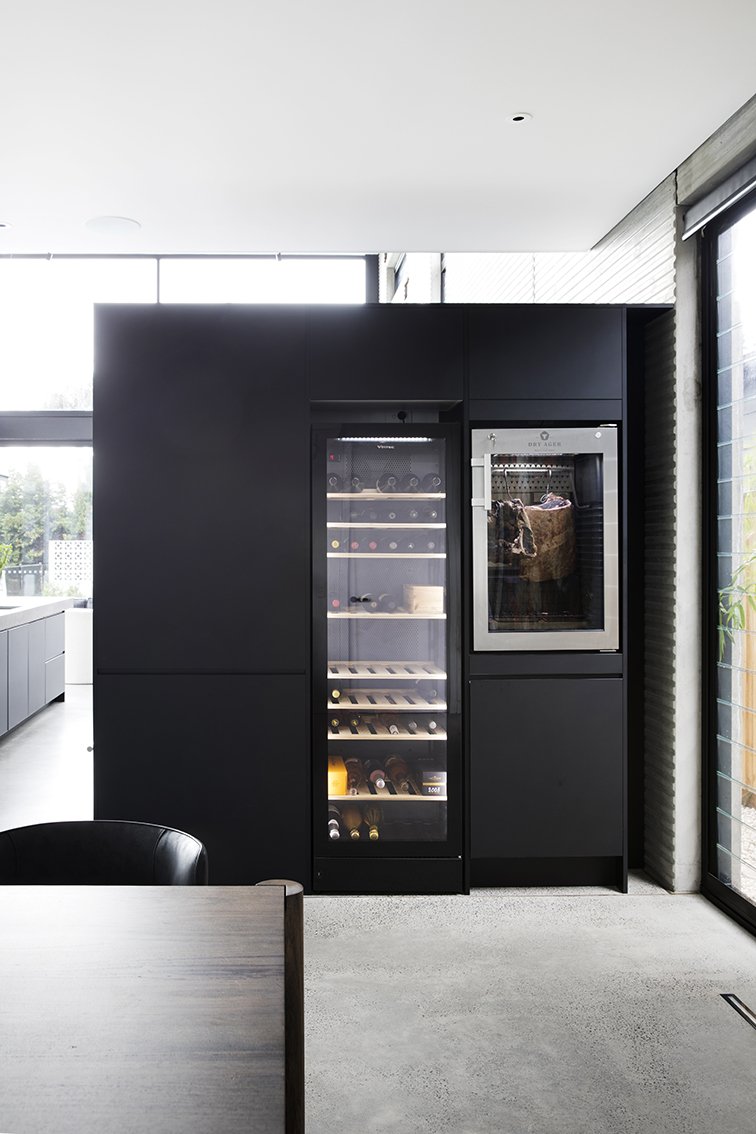 The stunning centrepiece of the kitchen is the statement island bench, which has been designed to be as long as possible within the space.

Measuring in at a huge 5.6m long, it features a U-shaped overhang to allow seating not only on the long side, but also around both ends, seating up to 12 people – the ultimate entertainer island! 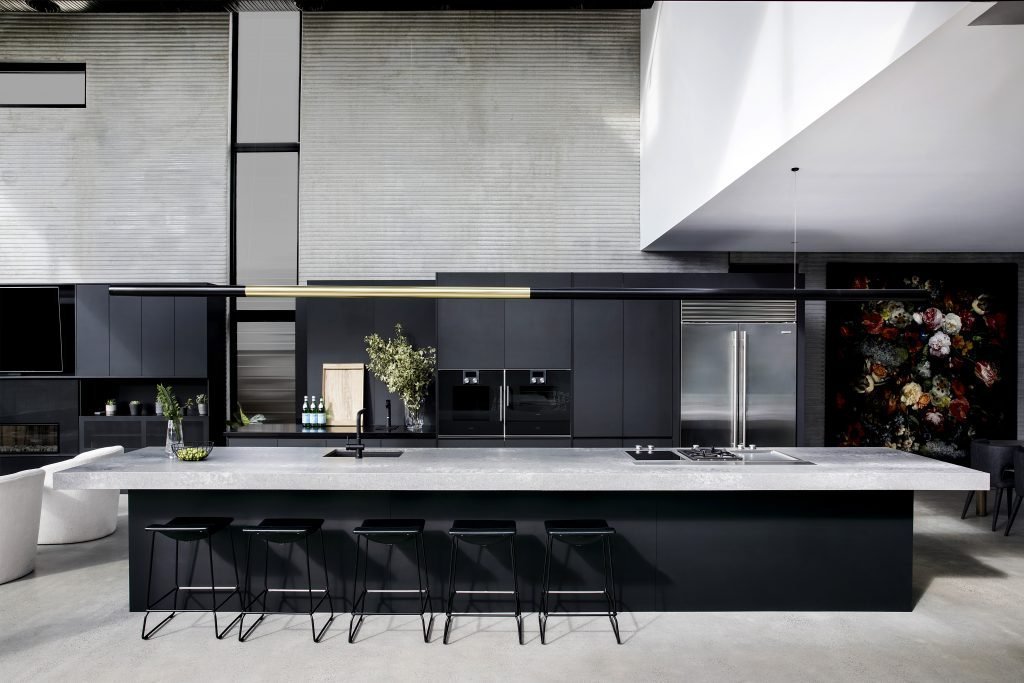 A large island bench also presents opportunity for further storage, so lots of soft-close drawers and compartment trays have been incorporated underneath. Despite the abundance of drawers, the Freedom Kitchens designer has cleverly kept the sleek look of 2 drawers where there is really 3, by putting hidden Internal Drawers into the top ones.

These are essentially a ‘drawer within a drawer’ so externally it looks like one, but internally it features a cutlery drawer on top of the bigger bottom drawer for plates. 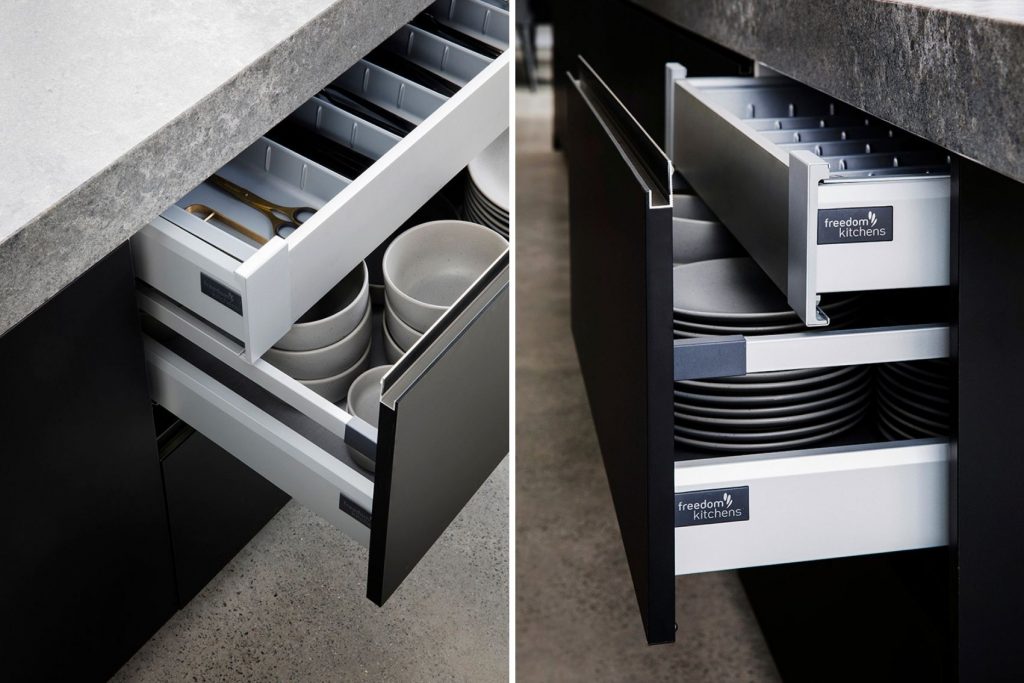 The surface chosen for the island bench to present a raw industrial edge is Caesarstone®’s Rugged Concrete: a durable engineered stone which features beautiful grey textural patterns, and a rough matte surface. Installed by Form-Rite, it has been finished with a bold 100mm mitred edge.

The island houses the Vario gas cooktop range by Gaggenau, split with induction Teppanyaki plates. In keeping with the sleek aesthetics, it also boasts a hidden downdraft ventilation, which rises elegantly out of the benchtop at the touch of a button. 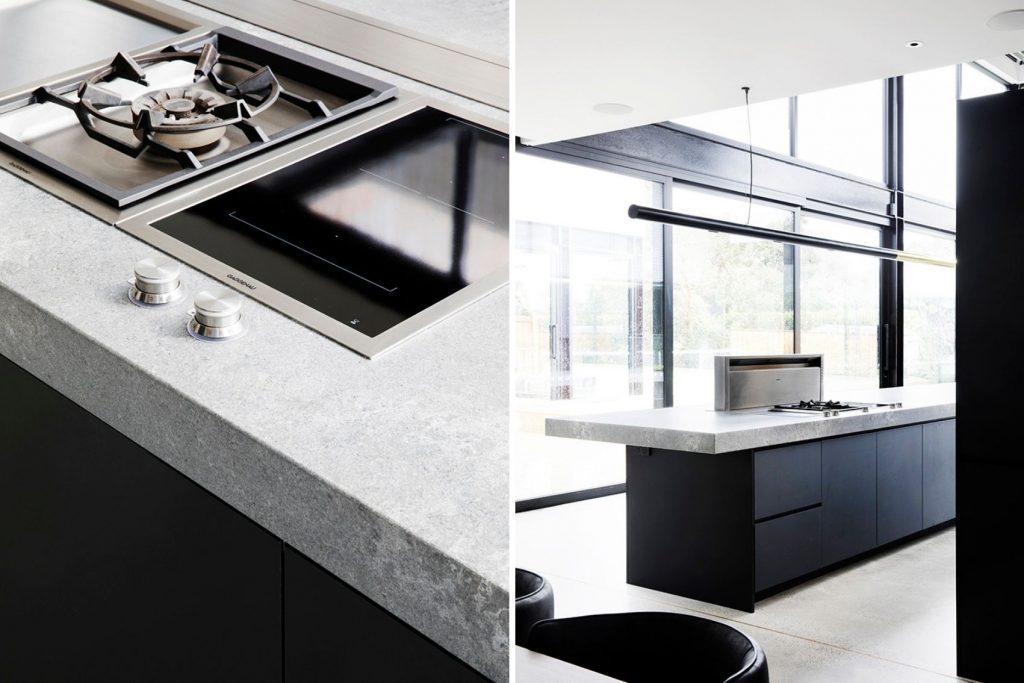 A deep Oliveri sink with Franke tapware have also been incorporated into the island benchtop, allowing Guy and Jules to face the outside views or people seated at the bench while using the sink. 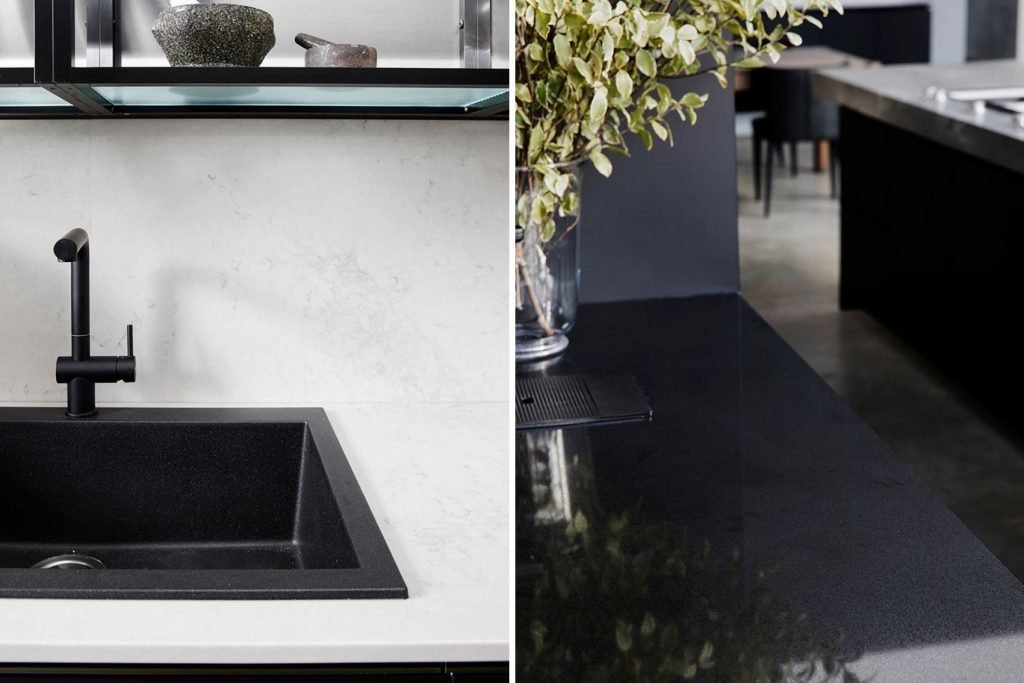 On the other side of the kitchen, Caesartstone in Jet Black has been selected for the rear benchtop, matching beautifully with the Supa Black cabinetry above.

Accessing the vast butler’s pantry is a design highlight.

There is a hidden door at one end, and a second concealed entrance behind pantry doors in the middle of the kitchen, eliminating need to walk around. 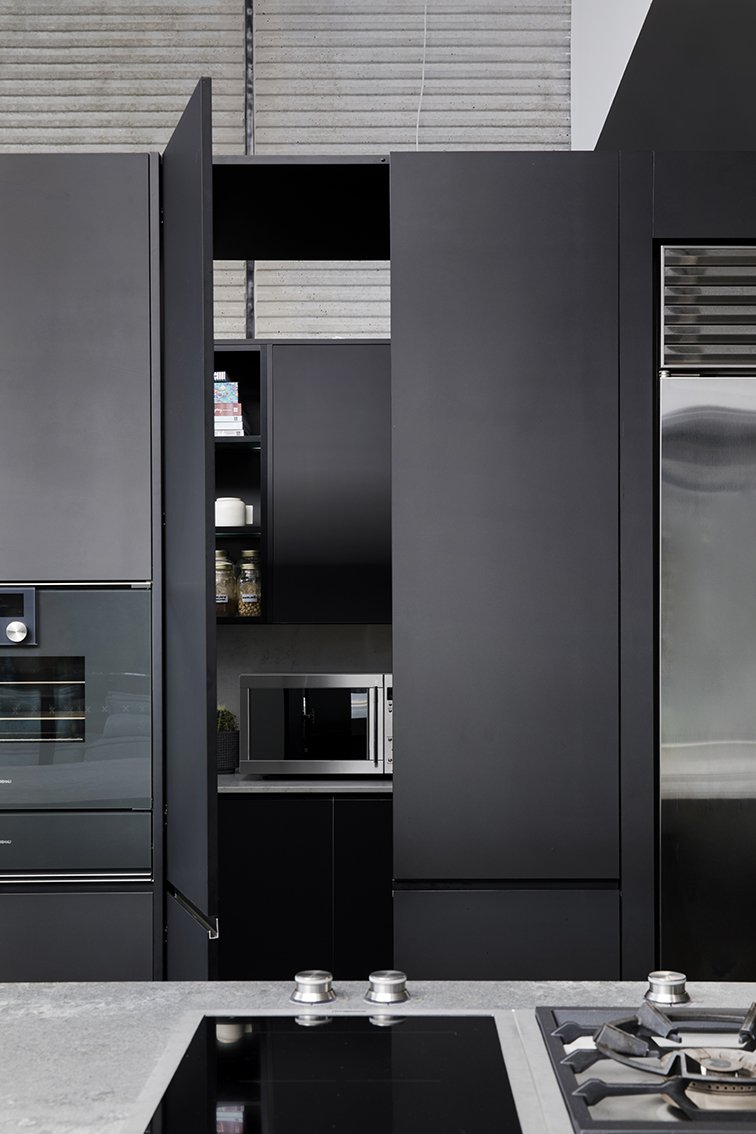 A look inside the pantry proves it to be just as appealing as the main kitchen.

For a consistent look, the same Supa Black cabinets have been used, but broken up with some industrial style open frame shelving, using Freedom Kitchen’s 2020 Black Alumin with broadline glass shelves. These are perfect for things that you want on display, like food jars, cookbooks, and even a little décor for extra style points.

The butler’s pantry benchtop is also the perfect home for their barista style coffee machine as well as the microwave, keeping the benchtops clear in the main kitchen. A second sink and integrated dishwasher in the butler’s pantry also serves to keep mess hidden.

For maximum practicality in this functional space, the benchtops and splashback feature Caesarstone in Noble Grey – lighter in tone than the benches in the main kitchen, it keeps the butler’s a little brighter for food prep and clean-up. 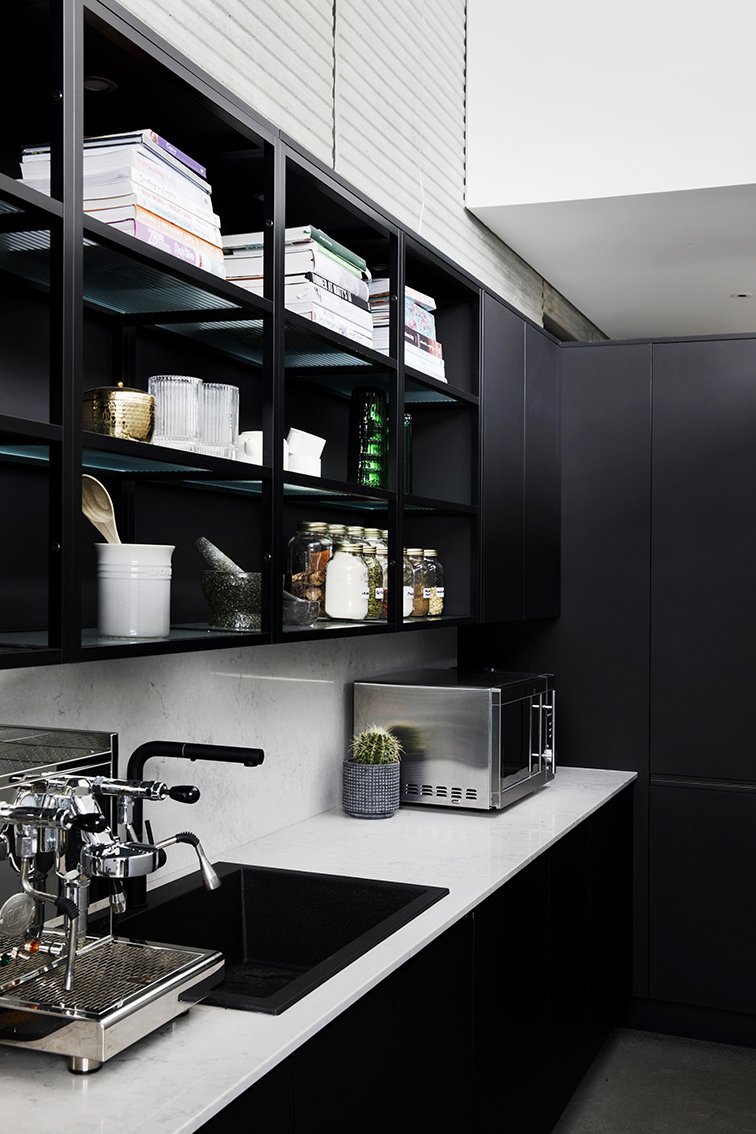 With its lofty high ceilings, atrium lighting and urban industrial appeal, Guy and Jules Sebastian now have a stunning statement kitchen which makes the most of their architectural vision. The scale, tones and textures used in their kitchen creates impact which could have been lost in this space if it wasn’t designed to have such presence.

The end result is a standout kitchen fit not only for fabulous entertaining, but also for creating special memories, as the heart of the home for this beautiful family. 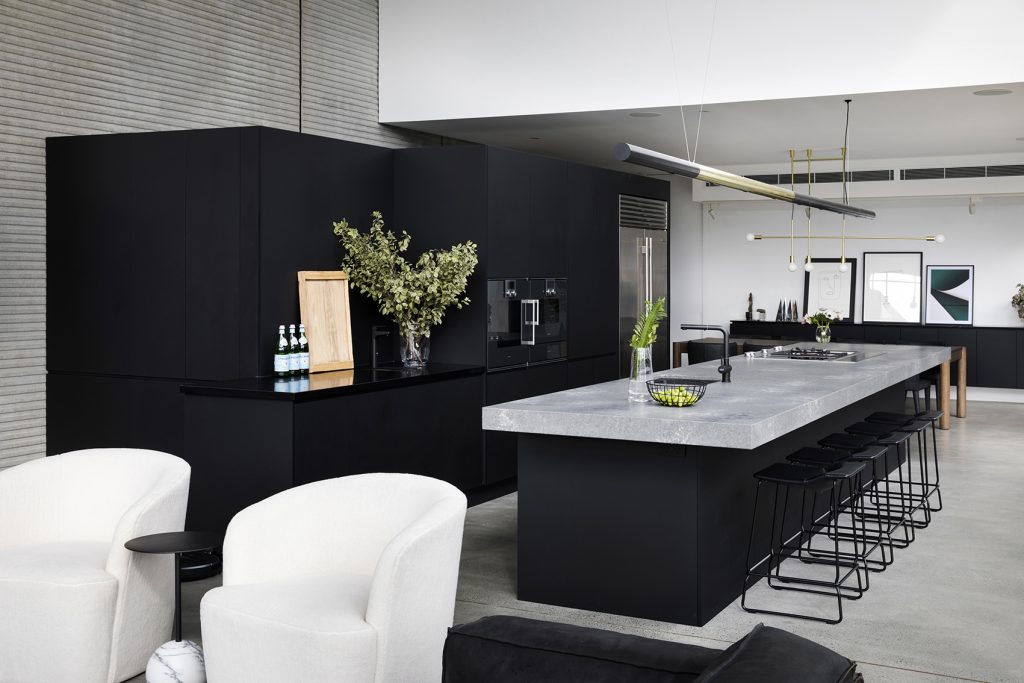